Our car number 1471 that carries the 250 KW diesel powered generator that powers the entire consist, is actually our youngest car by far. This MHC, (Material Handling Car), was built in 1984 by the Thrall Car Company as a batch of cars designed for mail and express service on Amtrak. These cars were similar to express box cars that were ordered by various railroads and by the Railroad Express Agency after WWII for use in high speed passenger trains. In order to save money on the MHC order, Amtrak provided high speed express car trucks to Thrall that were salvaged from older, out of service Railway Express equipment and completely rebuilt for the MHC’s at Amtrak’s Beech Grove, Indiana shop.

MHC 1471 resembles a modern box car in many ways, but there are some major differences – a lower profile so it can operate through the Hudson River tunnels at New York, passenger car air brakes and couplers, and under car cables to connect trailing passenger cars to the locomotive for electric power, and of course the high speed express car trucks. In Amtrak service, the MHC’s were primarily assigned to carry bulk mail for the United States Postal Service between major terminals. While this assignment was not glamorous, the cars high performance was often exploited. It was common for a solid train of MHC’s, each carrying 50 tons of mail, to travel at up to 105 mph between a mail hub at Springfield, MA and Washington D.C. — over night every night.

The MHC era ended suddenly on Amtrak in 2002. MHC 1471 had just been overhauled at the Beech Grove Amtrak shop, and was not yet back in service when Amtrak made a decision to immediately exit the mail and express business. Amtrak sold the car to Cincinnatian Curt Potter in 2003 who used it for storage until purchase by Brian Collins and Bill Thomas for use on the Cincinnati Dinner train in 2011. The new owners modified the car to serve as a power car and painted it burgundy with large white letters identifying the dinner train. 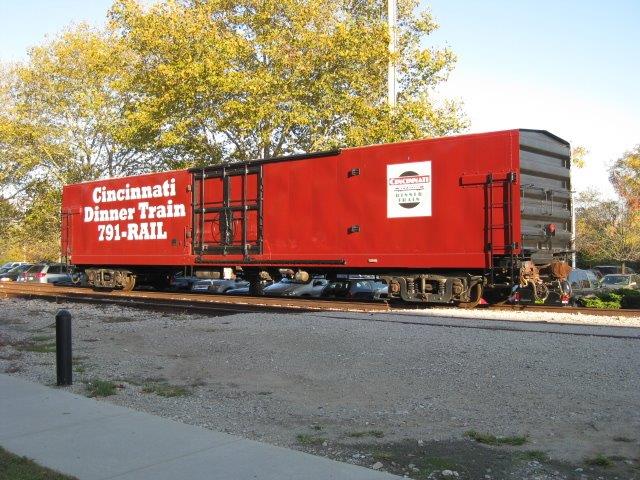 We continue to monitor the guidance, requirements, and recommendations from the state of Ohio and various agencies as it relates to COVID-19. Unfortunately, due to the fixed and permanent setup of our dining tables on our railcars, we must cease operations for the time being.  It is our hope that we can begin operating once again soon. The health and safety of our staff and community continues to be important during this time.  We have ceased any reservations until we can resume the “full” dining experience.

So for now, it’s not goodbye, it’s see you later.   Stay safe and stay healthy!